In 1994, SWAN was designed as a multi-site, observational study to be conducted in three phases. The initial phase consisted of focus groups of women with characteristics similar to those subsequently enrolled in SWAN. These focus groups were conducted in order to develop the most effective and culturally sensitive study design and protocols for recruiting and retaining diverse groups of women into SWAN.

The second phase was the cross-sectional survey, a 15-minute interview, which was administered to women who met the following criteria: residence within the geographic area specified by the clinical site; ability to speak and read English or the designated language (Chinese, Japanese or Spanish) of the clinical site, age 40-55; and self-identification within one of the two race/ethnicity groups studied at the clinical site. Each site used population survey methods to contact a generally representative group of women for the cross-sectional telephone interview. Interviews were conducted by telephone or in person. The SWAN cross-sectional screener dataset has been archived at the National Archive of Computerized Data on Aging (NACDA). To find out more go to the NACDA website, click on search holdings and type in SWAN. 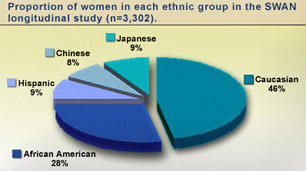 In the third phase, eligible premenopausal women were enrolled from the cross-sectional phase into the longitudinal follow-up study. Women who met the eligibility criteria were 42-52 years old, had a uterus and at least one intact ovary, reported a menstrual period within the past three months and had not taken hormone medications (such as birth control pills, estrogen or progesterone preparations) in the last three months. Enrollment into this phase began in January 1996 and all seven clinical sites completed the baseline visit by December 1997. A total of 3,302 eligible women were enrolled into the longitudinal study population of SWAN and completed the baseline study (1,550 Caucasian, 935 African American, 286 Hispanic, 250 Chinese, and 281 Japanese).

SWAN has operated under five funding periods and has completed the screening, baseline and 16 follow-up visits. Visits have taken place approximately every year. The annual visit has included the following core components: physical measures (weight, height, hip, waist, and blood pressure), fasting morning blood draw, interviewer-administered and self-administered questionnaires. Women were also given menstrual calendars to complete monthly over the next year. All questionnaires were translated into Spanish, Cantonese, and Japanese and could be administered by bilingual interviewers.

SWAN just finished its fifth funding period which included a single in-person visit (visit 15) for the whole cohort, as well as two bone mineral density (BMD) measurements for women participating in the BMD protocol(visit 16). In addition to the annual visit core components listed above, new measures of physical function, physical activity, sleep, cognition, and vaginal, urogenital, and sexual health were completed by SWAN participants at visit 15.